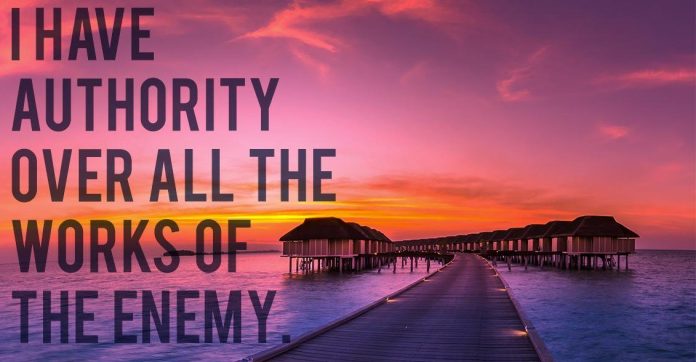 Do you know that as a believer in Christ, you have authority over the enemy?

It is true that the devil is the god of this fallen world (see 2 Cor. 4:4 NASB), who “walks about like a roaring lion, seeking whom he may devour” (1 Pet. 5:8). But we, as believers, are not called to cower in fear like the people of the world, for God’s eternal Word proclaims that “He who is in you is greater than he who is in the world” (1 John 4:4).

In Christ, we have authority over the devil and all his cohorts. In Christ, we have authority to tread upon the lion and the cobra. The fowler’s snares shall be foiled and the hunter shall be the hunted. Our role in this increasingly dangerous world isn’t to be passive and indifferent, waiting to be devoured by the roaring lion. We are endued with power and authority to hunt down the roaring lion!

The Bible records the account of how Samson was in the vineyards of Timnah when suddenly “a young lion came roaring against him” (Judg. 14:5). Now, what would you do if you were suddenly ambushed by a lion?

Psychologists tell us that there are essentially three possible responses that are instinctively triggered when a person is unexpectedly thrust into an extremely dangerous situation—fight, take flight, or freeze. While most of us would probably either take flight or freeze, Samson instinctively rose to fight: “the Spirit of the Lord came mightily upon him, and he tore the lion apart as one would have torn apart a young goat, though he had nothing in his hand” (Judg. 14:6). Now, that’s taking authority! The hunter came at Samson but found itself the hunted!

Sometime later, Samson passed by the lion’s carcass and saw a swarm of bees and some honey in it. So he scooped out some of the honey and ate it. It was from this experience that Samson came up with this riddle, “Out of the eater came something to eat, and out of the strong came something sweet” (Judg. 14:14).

There is a beautiful picture here for all of us. Instead of being eaten by the lion, Samson obtained something sweet to eat. What is the spiritual truth for us today? Out of every evil and negative thing the devil throws at you today, God will make something sweet for you. Your giants will be as bread to you. God will turn every bitter adversity into sweet honey for you!