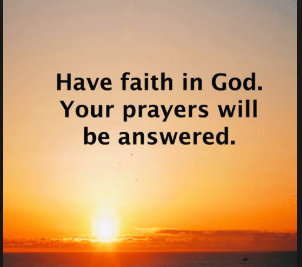 1 Peter 3:12
“because the eyes of the Lord are on the righteous and his ears are open to their prayer. But the face of the Lord is against those who do what is evil.”

Setting the Standard
So much emphasis is put on God’s grace today that His standard of holiness is overlooked. Many in the Christian world think that they can do whatever they want and it will be okay. They claim liberty and freedom in Christ, which is true, but if you are sinning, it has ramifications. If you look at Peter’s words, you notice that the Lord hears the prayers of the righteous, but He is against those who do what is evil. This isn’t a separation of those who are saved (righteous) and those who aren’t (evil), it is a separation of those who are obedient and disobedient. Are your prayers being heard?

Answered Prayer
Many prayers aren’t heard because people have unforgiven sin. They continue to live their lives as they wish, which includes willful sinning. They treat God as a cosmic Santa Claus only asking him for the things they need. God turns his face against those people. He is long-suffering, waiting for them to repent, but He slowly turns off all the facets of his blessings until only one avenue exists, repentance. There is always one prayer that God will hear, and that is one of seeking forgiveness. If you have strayed from God turn back to Him today and seek to be restored. Repent of your sins and be renewed. It will reopen the ears of God to our prayers and draw our hearts closer to Him.