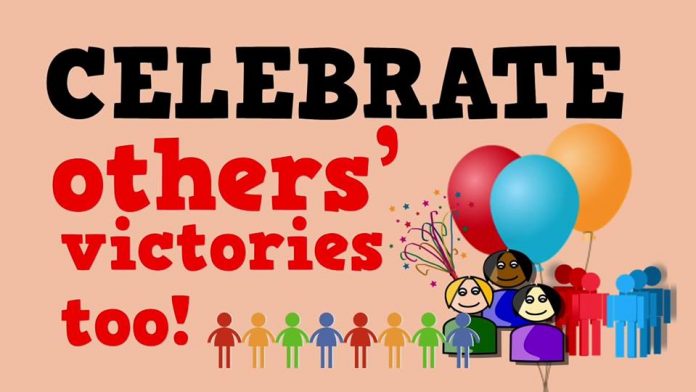 1 Peter 2:17
17 Show respect for all people [treat them honorably], love the brotherhood [of believers], fear God, honor the king.

Consider others as better than yourself. That is what the Bible tells us to do; it is the culture of the kingdom that we belong to but it’s easier said than done. Every other person wants to be a celebrity, they want to be a brand, they want to stand out and because of being so self-focused then we pull others down so that we can look better. For some reason, we have believed that celebrating others makes you less than they are.
We live in a man eat man society and from a very young age it is pumped into us that we must be the best, we must get to the top. This trains us to see others as rivals and thus it becomes hard to celebrate them. Affirming and celebrating others is not something that we are taught. Instead, we are taught how to beat the competition. We have churches trying to outdo each other instead of working together. This has created more division in the body of Christ because we see each other not as a body but as rivals.
Sometime back, I celebrated a good friend on their social media page and some of the comments perturbed me. You see, this friend works in a Christian station I used to work for and he does the breakfast show, the same thing I do for the Christian radio show I am currently working at. People were shocked that I was celebrating him publicly and saying how he was doing a great job. In the eyes of the people he is the competition and for me to say good things about his show means I will lose listenership. I told them I don’t see it that way. To me he is a fellow brother in the faith and we are in the same field doing the same work for the same Lord who called us both. If the Lord saw it fit to call him, who am I not to celebrate him? Celebrating him does not remove anything from my calling.
We need to come to the understanding that we are one body, we are not competing, we are to work together. We must celebrate one another. Do not feel offended when God blesses your neighbor, celebrate with them because as one friend put it, “If God blesses your neighbor, don’t get angry or jealous, celebrate because it means God is in the neighborhood and you just might be next.”
Take sometime today and celebrate someone who the world may see as your competitor.