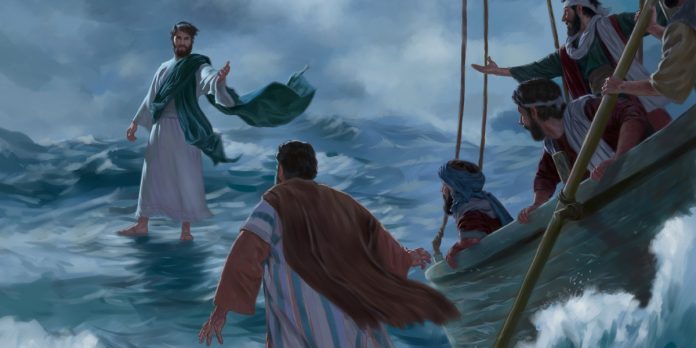 The disciples are in the middle of the sea at night. The winds are against them and the waves are beating hard against the boat, they are in distress and fear. Jesus appears to them walking on the water and when they see Him they are terrified even the more and they cry out saying it is a ghost. Picture yourself with them in the boat in the middle of the night and you see a figure approaching the boat walking on the water. I am sure you would also be as terrified as they were and you would also come to the conclusion that it is a ghost.

In the storms of life Jesus may appear like a ghost. He may come through to help you in the way that you least expect. His solution may seem like a bigger problem and you may find yourself going into warfare and binding thinking it is the enemy. This one thing is for sure, when you are going through the storms of life; do not always trust what you see at face value, ask God to give you discernment and revelation.

Jesus spoke and identified Himself and that brought a bit of calm but you can tell they were still afraid because only Peter responded to him. What you hear when going through the storm of life is very important because it will determine your next move. When we allow fear to take over then we see everything through the eyes of fear and not faith. Faith is needed to move forward in the midst of the storm. Notice just because Jesus appeared to them, that did not change the situation. The winds were still against them and the waves were still beating hard against the boat.

Are you in the middle of a storm in your life?
Have you allowed fear to take over?

The very thing that may seem to be adding to your fears may be the very thing that is Gods solution to your storm but it takes discernment and faith to be able to move to the next level. Ask God to open your spiritual ears that you may be able to hear him speak and when He does obey in faith because the “ghost” in your storm may be the help that God has sent your way.