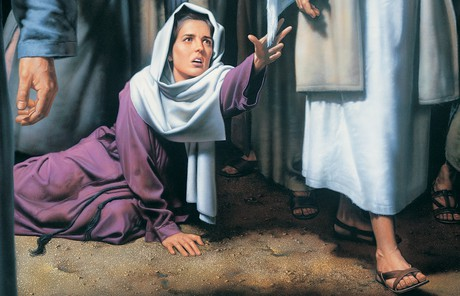 And a woman who had [suffered from] a hemorrhage for twelve years [and had spent all her money on physicians], and could not be healed by anyone,

This woman has known peace and acceptance at one point in her life. She was not always this way, she used to live a normal life but then one day the blood started blowing and it did not stop and her whole life was turned upside down. She had been to many physicians but nothing had changed. In fact, she had been to so many physicians that she had spent all her money and now she was an outcast.

12 years of hoping, I can imagine how her hopes were raised each time she was referred to another physician probably with the promise that this one was not like the others and he would cure her only for her to lose her money and go back home the same way she came. I cannot begin to imagine the disappointment each time she was let down. 12 years but she never gave up, in her desperate state she never lost hope she kept searching until this day when she did something that would not cost her any money but it would require faith and determination like she had never mustered before at any other point in her life.

One great lesson we can learn from her is to never give up. Had she given up she would never have found her healing. Life brought her down to her knees but even in that position, she did not give up. She literally pushes her way through the crowd until she got her miracle.

It is easy to give up when you have been searching for something for such a long time and it just seems to get further and further away. When you have been looking for a solution for years, a miracle that never seems to happen, it may seem like God himself does not want you to have it and each time you get closer to it, He moves it further so as to torment you. Nothing could be further from the truth. God has a good plan for your life and He wants you to have the very best. Like this woman and several other people in the bible, take courage, do not give up and do not even think for a moment that God does not love you. Job believed God throughout his trial and even though his friends had all sorts of ideas as to why this was happening to him and his wife told him to curse God and die, Job stood his ground and God came through for him.

Hang in there, don’t throw in the towel yet, Help is on the way.

God has a good plan for you and in it’s time He will make all things beautiful.